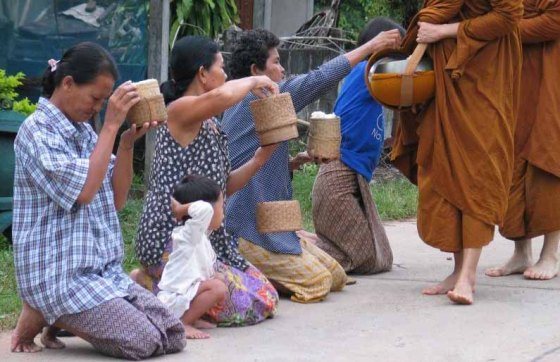 POSTCARD #31: In Buddhist countries, babies are taught when they are about six months old to put food into the monk’s alms-bowl. The whole family applauds as the sticky rice drops from that little hand into the monk’s bowl. The kid gets the idea early on: when stuff leaves your hand, you get this happy feeling. It feels good to give.

Everything the Buddhist monk receives is a gift, an offering; the monk is a mendicant, and lives entirely on the generosity of others: ‘Our bodies are fueled by the food that is offered to us. In fact, scientists say that all the cells of the body are replaced every seven years, so any (monk) who has been ordained for that long has a body that is completely donated. If it were not for the accumulated kindnesses, efforts, and good will of countless hundreds and thousands of people, this body would not be able to sustain itself. Kindness is the actual physical fabric of what we think of as ‘me.” [Ajahn Amaro, ‘Generosity in the Land of the Individualist’]

Generosity is cultivating an inward disposition to give, a glad willingness to share what we have with others. Give it away, we have more than enough. Ease the discomfort of being driven to fulfill that urge to ‘have’, to ‘possess’, a hunger created by always wanting more. All of it is gone when you’re generous. Brainstorm the word ‘generosity’ and you come up with loving-kindness, compassion, empathy, well-being, freedom. You find gratitude, grace, honour, motivation, encouragement. Generosity is everything. It’s nature is to share, recycle, circulate; it can only be given, never taken.

Generosity, is a mental, emotional letting go; releasing the tenacity of holding on to things; all that baggage we burden ourselves with is removed in one single act of generosity. Generosity means not holding to the self-concept, the separateness applied to things that are really ‘in context’. Seeing it all as process, ever-changing; a connectedness with the outer world. Generosity leads to wisdom – the truth is without bias. The cultivation of generosity directly debilitates greed and hate, and facilitates the kind of mind that allows for the eradication of delusion.

‘There was a seeker and a wise man. The wise man had a most incredible jewel and the seeker was absolutely amazed by the jewel. He asks the wise man if he would give him the jewel. And the wise man gives it to him. The seeker is very excited and afraid that the old wise man is going to change his mind, so he hastily says goodbye and goes off. A short while after that he comes back, approaches the wise man with great humility and respect, lays the jewel down in front of him on the ground and says he’d like to make a trade. He’d like to exchange this jewel. And the wise man asks him what he wants to exchange it for. The seeker says he would like to exchange the jewel for knowledge of how to gain the sort of mind that could give up a jewel like that without a second thought.’ [This story appears in Khanti – Patient Endurance]

Sources include: Dana: The Practice of Giving

Upper image is from the Wat Pahnanachat collection

27 thoughts on “generosity is letting go”