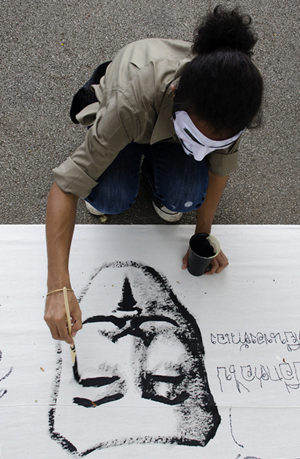 POSTCARD#62: Chiang Mai: Why am I awake? Lying here in the half darkness – can it be morning already? But it’s still night. There’s an illuminated hotel sign across the way that shines in my window all the time and it feels like dawn entering between the half-drawn curtains. I hear voices speaking English from the street below. The sound comes in through windows wide open. It must have been this that woke me. What’s the time? Wow, 2.30 am… is this some kind of emergency? Get up and walk over to the window, look out. I’m on the 3rd floor and see there’s a group of white guys down there, brightly lit from hotel signage. I hear bits of what they’re saying… sounds intense. There’s a feeling of urgency, everybody talking at the same time. Where did they come from so suddenly? Must have arrived in a tourist bus coming from somewhere, hotel staff carrying luggage inside. It takes a moment to see they’re mostly drunk, smoking their cigarettes because it’s not allowed inside. Talking over each other in a great haste of words, incomprehensible babble and too noisy for 2.30am.

I feel someone should be objecting to this noise, lean out the window: Hey, guys! You know what time it is… eh? But the hotel security man watching from the doorway doesn’t intervene. The night staff at the reception desk act like this is not happening – mindful of the discomfort but it’ll be over soon, cigarette-time doesn’t last long. The drunk guys meanwhile go on venting their spleen, or whatever, and don’t have any idea that it’s not cool to be losing your cool like this in Thailand, drunk and causing a scene in a public place. Not because it’s “bad” or against the rules – do it in private, no problem. In public it creates a kind of Thai embarrassment called ‘losing face’. The predicament of not knowing what to do…

It’s how the history of things developed in this part of the world, and the Buddha’s teachings. The art of the ordinary smile, leaving unnecessary stuff unsaid is a skill we Westerners never learned. We have the ego, the ‘self’ and the concept of ‘my’ rights… a different world. I’ve seen Thai people hold composure until the face goes white, pouring with sweat, emotions locked in ice-like conditions, and still nothing inappropriate is expressed. This is ‘saving face’, an extraordinary capacity to function without a show of anger. The political demonstrations in Bangkok are an example of ‘face’ with underlying sense of dread that the powers-that-be may be waiting to see how far the situation can be pushed before reaching the tipping-point, beyond which it becomes truly scary for everyone, a kind of insanity; ordinary people running straight into a hail of bullets [Link to: 1992 Black May] and the catastrophic events since 1973.

Maybe it’s the fear of it happening that holds things in a benign pleasantness with mutual-respect and the clear intention always to do the right thing in any kind of situation – or maybe they’re just nice people? And this is how it ends; the drunks finish their cigarette-smoking and stagger off indoors. I watch them from my place up here on the 3rd floor, level with the treetops. Scattered cigarette butts on the road down below that’ll be swept up by the morning. And after a while, it’s like they were never there. There’s quietness and a fragrance of small jasmine flowers that blossom in the night. I open the windows a bit wider, go back to bed and wait for morning.

‘The third Noble Truth is the truth of cessation. Not only do we let go of suffering and desire, we know when those things are not there. And this is a most important part of meditation practice, to really know when there is no suffering. Suffering ceases, and you are still alive, still aware, still breathing. It doesn’t mean that the world has ended, that everything has become blank; it means that the suffering has ceased. The suffering ends, and there is knowledge of the end of suffering.’ [Ajahn Sumedho, Suffering Ends]

Through The Cracked Window (Revisited)