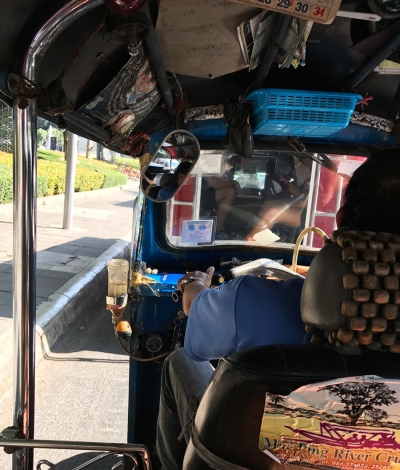 POSTCARD #240: Chiang Mai: Getting into a tuk-tuk by way of the acquired skill of folding myself in half to get in then, for me, partially unfolding the upper body in a laid-back posture, knees almost level with shoulders – and I can get home by way of a wormhole in space-time, narrow streets and shortcuts known to tuk-tuk drivers only. Getting out the same way I went in, it’s a tight squeeze but many things are like that for me here. I live in a world tailored to fit a population that’s smaller than me and different in all kinds of ways. In the shopping mall, if I ask for their XL sizes, they show me, say it’s a shirt, something that would fit a ten-year-old boy in Northern Europe. So I get the clothes I need in a special ‘Export’ shop that brings in Cambodian-made garments with their labels removed that’ve first been exported to Australia.

It does require extra effort to see how to fit, and you just can’t take things for granted – size is not the only thing that’s different here, of course, it’s the way people think. The Thai worldview is culturally tight (there are important exceptions) compared to what has become for me a shape-shifting global opinion. I’m a foreign resident so I’m the one who needs to fit in with the host culture. How to get the mind to change? Buddhist practice, and I’ve learned how to literally put myself in the shoes of a different cultural background, tight fit though it may be, and I’m so used to doing it now, after thirty years of trial and error, it mostly works okay. Sometimes there’s a part of me that automatically resists, but there’s also the learned behavior of… hold that thought, how can I get around to intelligently accepting this? Not just making the best of it, but developing the ability to change.

And, the fact is, this awareness of the cultural norm, a sensitive subject for most of us, also the custom-built, bespoke, consumer preferences and attitudes that go with it, not to say politics – all this is something I gave no attention to when I lived in my own part of the world, thirty something years ago. In those days I never even considered the cultural parameters within which people like me stumble along, unaware of the rest of the world and blind to anything outside of received perception, based on received knowledge, behavior and the frequency of breakdowns over this incomplete knowledge, questioning and “what’s the bigger picture?” So there comes the inevitable cut-off point.

When I was a kid, I had no opportunity to see how the world view in any given society is tailored to fit it’s own people in every conceivable way; philosophical, political, ideological belief systems, language, the way we think and behave, every single thing. Not completely unresponsive to change though. Thailand is a culture that has managed to prevent the take-over by a Right Wing political presence (currently the resistance against business tycoon Thaksin Shinawatra’s family), over the years since 1973, through the continued upsurge of public feeling.

Simple, we have to open our eyes, look and see the devils are built-in to the system of democracy. Thailand’s effort, easily achieved some would say, in a small country with a predominantly Buddhist population. Not so in the USA in all its vast diversity where, by some strange unexpected turn of events, Donald Trump, a real estate mogul/gangster is in the white house, “the fox is in the henhouse, the cows are in the corn”*, and everything is going to shift around now to accommodate this new circumstance. Public opinion shaped by CNN coverage of fearful disasters that’ll soon control, and then gradually withdraw the formerly expansive embrace of American generosity and welcoming.

This is the world wake-up call! Lessons learned. Four years for the electorate to find a strong candidate and really get the complacent, sleeping democrat population out there to vote. Nothing is impossible.

“For a seed to achieve its greatest expression, it must come completely undone. The shell cracks, its insides come out and everything changes. To someone who doesn’t understand growth, it would look like complete destruction.” [Cynthia Occelli]