POSTCARD#316: Bangkok: I’ve been here long enough to remember what some districts looked like without the huge shadow of the elevated highway and overhead Skytrain. Congestion underneath; traffic jams, and not much room. Small markets, street food, but the population were okay with it – maybe forced out because a massive concrete pillar had to be situated right in the middle of where they used to be. But mostly they found another location, moved back a bit, shared the space among themselves giving way to the changing infrastructure.

The photo above shows the North/South Highway at Nontaburi that meets the city network of raised highways. On the right stands the Buddhist Wat Bua Kwan temple – buildings coloured red and cream. I don’t know if they lost a bit of land in the intrusion of the highway, they probably did. One thing the monks and laypeople who lived there lost, was the relative silence of how things used to be before the highway came. The noise level now must be incredible.

Then the road was finished and we’d pass by above the temple often, seeing only the exotic peak of the roof at first. After some time the roof was taken down and scaffolding appeared instead, then an upper floor was built. When the floor was completed, an enormous Buddha statue was placed in the centre facing East and the sunrise over the rooftops below. Then the walls and roof were built up around it. 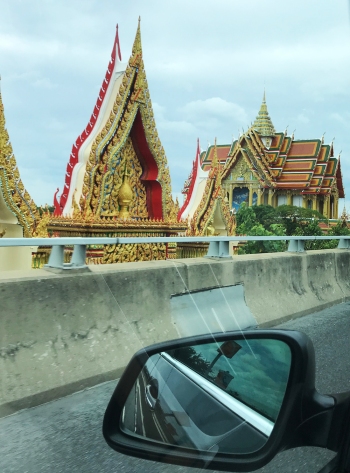 It sounds like all this happened very quickly but it took special artisans 5 to 6 years, working  slowly and carefully, and allowing time for blessings and ceremonies to take place. Each part of the upper floor and walls were done in the same way and the special curved roof was completed with the whole extent of mindful observances.

Now it’s finished and we pass the building on the left side (lower photo) as we go into town (Thailand drives on the left). Coming back at night the whole thing is lit up and… it just blows me away.

Also the sense of the monks there, and in meditation morning and evening, otherwise occupied with household tasks, teaching in that beautiful place – but surrounded by this colossal sound of traffic 24/7. It says something about patient endurance, the way one can tolerate external things mindfully and allowing internal narrative to be in balance. The monks living there are sending a clear sign to car drivers and passengers passing by that it is possible to calmly persevere with mindful attention, sometimes in difficult circumstances. Remembering too that all things arise and pass away.

Ajahn Chah was in London, staying at the Hampstead Vihara. The monks were troubled by the noise that was coming from the pub across the road. Ajahn Chah told them that the cause of suffering was their sending attention out to trouble the sound. Sound itself is just so. Suffering only arises when we ‘go out’ and add something extra. Seeing our part in creating problems, a shift in the way we view struggles takes place. Instead of blaming, we simply ‘see’ what we are doing, in the moment. Let’s not get into a fight with hatred; exercising careful restraint and with Ajahn Chah’s reflection, we let it ‘fall away’

Initially we see this only after we have reacted and created suffering. With practice we catch it sooner. One day, we will catch ourselves just as we are about to create the problem. (Ajahn Munindo)