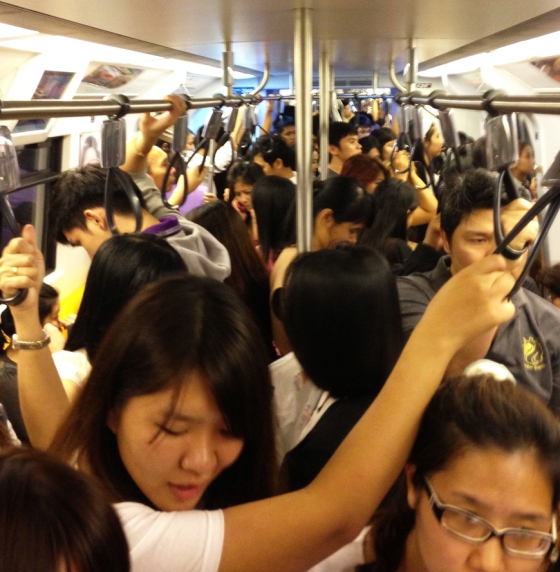 POSTCARD#326: Bangkok airport: Arriving from Chiang Mai, all trains into town are seriously crowded and no taxis available anywhere at the airport. Therefore I become the Crowd, one of a very large number of individuals caught in the rush on a Friday evening. Somebody later said it’s because all the international schools start again on Monday. Whatever, go with the crowd, it’s decided for me, I accept. I am subject to the public transport System, I am being ‘taken’, it’s about the process, rather than any particular person controlling the process. For different reasons, I could create a Controller in my imagination, like the bosses, the management and blame it all on them/him/her/it, but it’s about the way it works, and there’s no ‘self’ in the equation – the deed is done but there is no doer, using the Passive Voice language function to express the Buddhist Truth of no-self (anatta).

Sounds are heard, food is tasted, and the chill wind of September is felt upon the skin. And the ‘self’ is absent; there’s nobody there that feels it, unless I consciously put together an identity composite, in which case I feel the chill wind of September (Active Voice). Language tells a story, creates a fiction that I can get lost in; only partially aware that it’s a constructed thing and most of the time I’m clinging to a concept of selfhood, an assumed identity. Thankfully, in the Passive Voice, there is no doer, things are done; the cognitive process is about ‘how it is’ rather than ‘what it is’.

The world is seen – I had an eye operation recently and what I didn’t expect was that it turned out to be an opportunity to contemplate this phenomenon of the experiencer. There’s the experience of visual stimuli entering the eye through a lens created by an industrial process and somehow the ‘me’ part of it is not in the place where it used to be. It’s all very new and quite interesting – maybe because I still have the ‘old vision’ in the untreated eye, something to compare it with.

I can see the world through the old eye as well as the new eye. It’s like the linguistic ‘voice’ can be both passive and active and I’ve understood it mostly in the active form; the process of ‘selﬁng’ is grasped at as an entity and identified with – a controlling thing. In the West it’s a ‘belief’. My difficulty with anatta has been extricating myself from the Judeo-Christian conditioning that assumes the existence of an eternal soul. I notice that Thais, happily, don’t have this problem. Even after 30 years in the East, I still struggle with my Western conditioning; an everlasting identity, the idea of it still lingers; a shadow of ‘self’.

Train moves along and Thai passengers behave with courtesy. I’m suddenly aware how it is in a crowded train in the West and the confusion of ‘self’ that’s going on there. Here it’s about being quietly patient, soon it’s my stop. Night, car headlights reflected in puddles, I’m standing in the rain, feet are soaked and D comes to get me in the car. The thought arises, the car is driven but there is no driver….

‘Where water, earth, fire, & wind have no footing; there the stars don’t shine, the sun isn’t visible. There the moon doesn’t appear. There darkness is not found. And when a sage, a Brahman through sagacity, has realized [this] for himself, then from form & formless, from bliss & pain, he is freed.’ [Bāhiya Sutta]