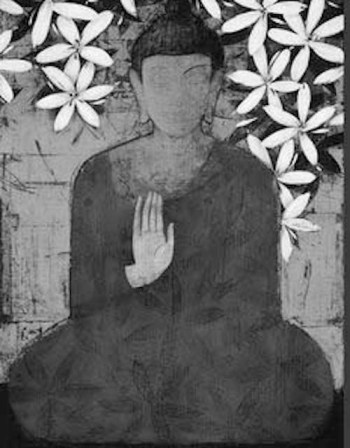 POSTCARD#378: Bangkok: This is the last part in the series of posts created from source material in “Heartwood from the Bo Tree” by Buddhadasa Bhikkhu. It is a conclusion of sorts, although how this slim volume came to be with me and the events that go with it, is worthy of including.

I found the book again after 20 years of it being lost in a deep cupboard. Such a precious thing to have it leap into my hands again as if by magic. Maybe it got picked up along with the Nokia Phone Manual (that’s how long ago it was!) and got lost in the cupboard for two decades. Finding the book came with all the memories of how things were then, discovering Buddhism for the first time – although there was something déjà vu about it – and how it opened up an understanding in my world that had never happened before.

I arrived in Thailand in 1984 after 2 years in South India. I know I was reading something referenced to the Upanishads at the time and it had a big impact on me… but I can’t remember much more. I do remember ‘What The Buddha Taught’ by Walpole Rahula and it was in reading this that I decided (perhaps wrongly) the turn-around point was at tanha (craving)

All of it was triggered as a result of visits to Wat Pah Nanachat in the north of Thailand and Wat Suan Moke in the South, where I came upon Ajahn Buddhadasa’s book for the first time. Gratitude to the monks I met in these two Wats who helped me understand the subject in more detail.

Today, I have to admit that I can’t seem to bring grasping and clinging to a close at phassa (contact), or vedana (feeling), despite Gratitude and Respect for Ajahn Buddhadasa’s insistence that there is nothing worth having or being in this or any world. Feelings of like or dislike arise and the various kinds of desire that spring from the urges of tanha (craving) are with me until my escape route begins – just before upadana (clinging) sets in.

Another thing I need to say is the constant headache caused by PHN in the Right Occipital Nerve, that’s hindered me these last 5 years. Perception altered due to the struggle with pain and pain meds which always seem to be ‘more than enough’. I become lost in conditions where I’m in the midst of ‘being’; or I stumble and fall over objects that I currently ‘possess’. But I’ve learned how to let go when signs of suffering (dhukka) are arising – last minute relinquishments. The following paragraph illustrating the turn-around point in cognition at tanha (craving), found unpublished in some old notes I’m including here:

“Idleness, sort of a wide-awake sleepwalking around this empty house. Soon, I find myself in the kitchen, pause at the refrigerator, open the door, look inside. Well, let’s see, is there anything in here? Or better to say, is there something in here I can put in my mouth that’ll satisfy the craving? It has to be the right thing, looking for that which is exactly the right one, this craving is for something sweet but there’s nothing here at all that’s sweet, only cheese. So I grab the cheese, cut a large piece off and chew on that, have the flavor of cheese in my mouth for the next half hour. It’s not what I wanted. Now I’m craving for sweet things with the taste of cheese getting in the way.”

Maybe it’s just a matter of being situated in that ‘place’ of mindfulness in the here-and-now and that’s enough, observing how there are things that’ll displace, me; powerful emotions, a short flash of like or dislike. These mind states are ‘seen’ same as everything else, momentary, and let-go-of more or less immediately and stability returns.

If not, I lose my ‘place’ for a while and then before I get back on track, there’s that experience of being totally lost for a while. Then I get situated in the here-and-now again, focusing on where I lost the place. Suddenly I re-cognize something and see that I must be functioning in that remembered way, then firmly situated again. Okay, so the mind may fall into a fixation with a passing thought, but at least I know that’s where it’s been.

These days I’m thinking I need to move on from these old reference points in my old comfortable way of understanding the world. That is, if you can see where you are and are aware of suffering caused by tanha (the craving for things you love and hate), then that’s all there is to it. You see it, you know it. Avidya (ignorance) is swept aside, no matter how much these established views may be held or the tenacity of the habit to hold on, because suffering will pass away of its own accord:

“Whatever is subject to origination is also subject to cessation.” “Of things that proceed from a cause – their cause the Tathagata has told. And also their cessation — Thus teaches the Great Ascetic.” [Venerable Assaji answers the question of Śāriputra the Wanderer]

I need to explore Sunyata “Emptiness” which Ajahn Buddhadasa examines in the second section of the book, where we see the truth that emptiness is the remainderless extinction of self. ‘The ‘remainderless extinction of ‘self’ is the non-arising of ‘self’’. In the long term I can see a situation whereby we prevent the arising of ‘self’ completely so that it has no way of arising at any moment in the here and now, nor at any time in the future.