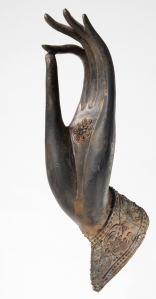 I didn’t know about Advaita Vedānta when I was a child and only recently discovered there were people like Alan Watts (and others) writing about non-duality in the Christian context, [link to part of the Alan Watts’ essay: This Is It].  Now I’m convinced it is important to focus on the fact that there is something at the heart of Christianity. The uncomfortable feeling that’s followed me all these years – that somehow I missed the point of the Jesus Teaching – all this has gone when I think of the Advaitist aspect of the teaching. It’s the missing piece of the puzzle I just stumbled upon, coming from an Asian perspective, an inductive knowing and that’s how it works.

The reason I didn’t see it before is because the Western concept of God, having human attributes (similar to the Advaitist idea of Ishvara), contradicts the rational scientific view. Accepting something that’s scientifically impossible, just because it’s written down in the Bible, doesn’t make sense. It’s like a myth and that’s why Christianity never had any reality in the West. What’s needed is to take it all a bit further.

‘… when human beings think of Brahman, the Supreme Cosmic Spirit is projected upon the limited, finite human mind and appears as Ishvara. Therefore, the mind projects human attributes, such as personality, motherhood, and fatherhood on the Supreme Being. God (as in Brahman) is not thought to have such attributes in the true sense.’

In Western countries, people are wandering around without a map. There’s the shopping mall and that’s all. How to let go of the individual ‘self’ if everything in the system is aimed at getting you to hold on? Looking for the way out by browsing possibilities will take a lifetime. The distractions built-in to window shopping behaviour are designed to keep you ‘shopping’ and prevent you from finding the way out too easily. By the time you get there you’ll have forgotten what it was you were looking for.

‘The Advaita Teachings are pointers, offered at the level of the audience, so to some people Jesus would talk about “a mansion with many rooms” and to other people he would say: “(heaven) is within.” (And) without understanding Advaita and the way pointers are adjusted depending on the audience, (most) Christians haven’t a clue what Jesus was talking about ….’ [link to Advaita Vedanta page]

Those who didn’t fall into the shopping mall trap just took the belief ‘thing’ to pieces to see what it was made of. That’s how it was seen that there was/is no substantial “self” in the centre of consciousness. It’s an operating system that keeps all working parts in the state of  ‘oneness’. ‘We are, right at this moment, God itself, and we can rejoice in that – if we can break out of our individual identity….’ If someone had been able to explain it to me like this when I was a child, the challenge to find out what it could mean would have been enough motivation for a lifetime.

‘When you fully understand that which you are and cannot not be, there is nothing to do to be what you are.’ [Jac O’Keeffe]

I wrote another post about this: ‘Jesus and Churchianity‘.

Note (i): There are two references in the Upanishads: aham brahmasmi (Brhadaranyaka Upanishad 1,4,10), and tattvamasi (Chandogya Upanishad 6,8,7), the instruction of Svetakatu by his father – very much earlier than the Jesus teachings. The 8th Century development by Adi Shankara is something for a later post. [link to ‘Christian Consciousness and Advaita Experience‘]

BuddhistRonin - A personal journey through Buddhism and the Martial Arts

"Taking the mystery out of Buddhism and the Martial Arts."