Mitt Romney’s 47% remark drew a lot of attention, perhaps revealing an uncharitable, grudging attitude but it does inevitably bring us around to seeing a quality we all possess: generosity of spirit. Generosity, as a mental, emotional letting go, means releasing the tenacity of holding on to things. Baggage, all that heavy stuff we burden ourselves with, is removed in one single act of generosity. What’s wrong with being generous; cultivating an inward disposition to give? A glad willingness to share what we have with others – why not? We have more than enough. Give it away. Ease the discomfort of being driven to fulfill that urge to ‘have’, a hunger created by always wanting more. All of it is gone when you’re generous.

Brainstorm the word ‘generosity’ and you come up with loving-kindness, compassion, empathy, well being, freedom. You find gratitude, grace, honour, motivation, encouragement. Generosity is everything. It’s nature is to share, recycle, circulate; it can only be given, never taken. With generosity we can accept, we can share, we can forgive. Generosity leads to wisdom – the truth is without bias. There is an understanding of things as they really are. 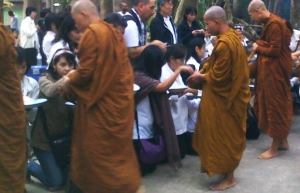 In Buddhism, generosity is seen as a way to counteract greed. It’s a way of helping others and a means of lessening the economic disparities in society. Generosity is part of Right View. The dhamma of generosity is a gift for all of society as we struggle for meaning in a world of dollars, logos, oil and military spectacle. The dhamma of giving is a disinfectant, a gunk dissolver, an antidiote for the monetary values, brand names that clutch at our hearts.

‘The complex American culture of healthy (that is, democratic) and unhealthy (worship of profit) elements…. Even middle-class Americans, rich by the standards of most of the worlds people, spend much of their money on indulgences, entertainment and addictions.’ [Practising Generosity in a Consumer World]

The cultivation of generosity directly debilitates greed and hate, while facilitating that pliancy of mind that allows for the eradication of delusion. In Buddhist countries, babies are taught when they are about six months old to put food into the monk’s alms-bowl. The whole family applauds as the sticky rice drops from that little hand into the monk’s bowl. The kid gets the idea early on: when stuff leaves your hand, you feel happy. It feels good to give. Everything the Buddhist monk receives is a gift, an offering. Ajahn Amaro describes it in this way: ‘Our bodies are fueled by the food that is offered to us. In fact, scientists say that all the cells of the body are replaced every seven years, so any of us who has been ordained for that long now has a body that is completely donated. If it were not for the accumulated kindnesses, efforts, and good will of countless hundreds and thousands of people, this body would not be able to sustain itself. Kindness is the actual physical fabric of what we think of as ‘me.” [Generosity in the Land of the Individualist] 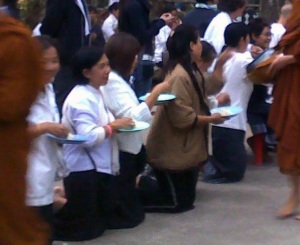 There’s the story about a seeker and a wise man talking together and the wise person has a most incredible jewel. The seeker is absolutely dazzled by the jewel and asks the wise man if he would give him the jewel. And the wise man gives it to him. The seeker is very excited and afraid that the old wise man is going to change his mind, so he hastily says goodbye and goes off. A short while after that he reappears, approaches the wise man with great humility and respect, lays the jewel down in front of him on the ground and says he’d like to make a trade. He’d like to exchange this jewel. And the wise man asks him what he wants to exchange it for. The seeker says he would like to exchange the jewel for knowledge of how to gain the sort of mind that could give up a jewel like that without a second thought. [This story appears in Khanti – Patient Endurance]

The gift of Dhamma excels all gifts. The flavour of Dhamma surpasses all flavours. The delight of Dhamma transcends all delights. Freedom from craving is the end of all suffering. Dhammapada 354

This post was created from the following references: Bhikkhu Bodhi: ‘Dana: The practice of Giving’. Ajahn Amaro: ‘Generosity in the Land of the Individualist’. Ajahn Jayasaro: ‘2. Khanti – Patient Endurance’ from ‘The Real Practice’ (Three Talks to the Monastic Community of Wat Pah Nanachat). Bhante Shravasti Dhammika – Link to source for: ‘Dāna, the development of its concept and practice’, Toshiichi Endo. Santikaro: ‘Practicing Generosity in a Consumer World’ from ‘Hooked’ (Buddhist Writings on Greed, Desire, and the Urge to Consume) page 198

One thought on “More Than Enough”