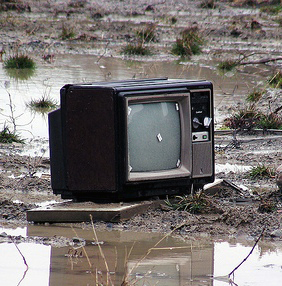 OLD NOTEBOOKS: East Anglia: There used to be a TV here but I gave it away. A big old fashioned dinosaur TV, too large for this little old cottage. No room for it; limited floor space, low ceiling height, clutter and junk (jutter and clunk). I manhandled the TV upstairs but it was no good there; then downstairs again and hurt my back in the process. It was always in the way; just too big. I had it under the table for a while but it looked silly there… and I started to see that it had to go.

But I was dependent on TV watching; every other activity took second place to that, and attempting to disengage from TV was a struggle. What to do? I’d try switching it off suddenly, right in the middle of something, a chat show, whatever, just to see what the room felt and looked like without all the noise, bright lights and rewarding, congratulatory applause. But every time I did that, the absolute silence of a world without TV was devastating! The lack of colour and severity of greyness in the house was just… sad! I had to switch it on immediately. TV was like a friend, I couldn’t say goodbye to it. I kept on doing that, though, switching it off and on again, in the middle of programmes, to surprise myself. Eventually I started to get interested in the idea of the silence that remained without TV, typical of the location I was in – a house surrounded by quiet fields and nature.

But TV-cold-turkey was no fun and I was in denial for a very long time. Then one day I was watching the BBC news and noticed the newsreader pronounced his words with a weird sort of ‘smirk’… kinda disgusting, and then the whole ugly ‘self’ aspect of it was revealed. Shocking, but I was glad it happened because it was obvious then that I didn’t feel comfortable with TV in the house – it had to go. I carried it out the back door and left it in the garden; went back inside and discovered this huge space in the room where it used to be. Interesting to see the directions in the room created by a focus on TV; chairs arranged so that viewing could take place comfortably. So I rearranged the furniture, changed it all around, and that was really quite liberating.

I’d return to the kitchen window from time to time and look at the TV out there in the garden – holding my attention, still… thinking, that object should be ‘inside’, not ‘outside’. Completely out of context in the garden, but I just left it there; no longer connected to it. Later that day, it started to rain and drops were falling on the dusty black surface – the urge to take it back in… that was difficult. The neighbour dropped by and he said it’s not a good thing to leave a TV out in the rain. I told him I didn’t want it anymore, maybe he’d like to have it for his spare room? Okay thank you very much… and, you’re welcome. So I gave him the channel changer and that was it. Off he went and I watched him carry it into his house, happily bewildered by my generosity and failing to understand my joy at having escaped the inertia of TV.

That was then; and this is now. I’m sitting on the cushion in an absolutely compelling silence. It’s before dawn, still dark, and I have the window wide open. Not cold but it’s raining, I’m upstairs and can hear a few rain drops hit the window sill, most of the rain drops are still on the way down. I want to experience this rain so I go downstairs open the back door, get my meditation cushion positioned so that I’m not bothered by drops or wetness coming into the house. Sitting on the surface of the planet listening to the rain striking the hard concrete outside and the grass beyond that. The open door to the garden, no wind here, dry and the sound of raindrops merged together in one whole mass of tiny collisions. An endless wave of pitter-patter-pitter-patter, like thousands of tiny finger snapping sounds. The generosity of rain.

‘Like a thief entering an empty house, bad thoughts cannot in any way harm an empty mind.’ [Padmasanbhava]