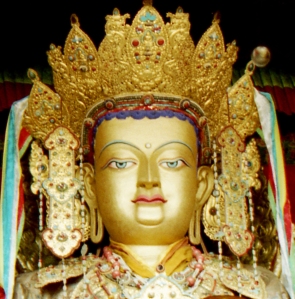 There’s a book by Jack Kerouac titled ‘Wake Up’, the story of the Buddha in the style of the ‘beat’ way. I used to have it on my bookshelf in the house in East Anglia and one day the electrician came to the house to fix some circuits and his young assistant picked up the book; a young guy, long hair sticking out, wearing shorts and running shoes, tattooed legs, said he’d heard of the Buddha and also Kerouac and that was pretty cool. So we had a little discussion about this. Later on I noticed the tattoo on his leg, there was something familiar about the flowing calligraphic style and then I remembered: Oṃ maṇi padme hūṃ in Tibetan script. I asked him about it and he was pleased that I’d noticed it; said he got it recently, didn’t know much about what it was, really, just looked good. And I told him, it was nice, and we looked at it for a while; him spinning his leg around so I could read it all, leg hairs and the indigo coloured inks. I said that I’d read somewhere this six syllable statement contains the essence of the entire teaching of the Buddha, according to Tibetan tradition. ‘Cool,’ he says. There it was, the innate consciousness in nature, activated by mysterious Sanskrit sound frequencies in harmonic resonance, tattooed on the leg of an electrician’s assistant in East Anglia.

Kerouac begins with the statement: ‘Buddha means the awakened one.’ Buddhism is the wake-up call; it’s built-in – comes with the software. There’s the quality of being aware; receptive to the whole thing. The sensation of sunlight on my skin, of how the body senses the outer world, and everything I see, hear, smell, taste, touch, feel and think. The mental faculty senses the larger consciousness, looking to see what that might be. It’s not the thoughts, the thinking process, or the identity of ‘me’ engaging with this. It’s anatta, what’s outside of all of that; an awareness that includes everything. And I can find it coming out through all the layers created by the mind. Just trying to understand what it takes to see what that sort of thing could be.

This holds my attention in a particular kind of way. It’s a kind of alertness, an ongoing investigation into the present moment and everything about the sensory function and the cognition of it is there too. It’s triggered by a simple curiosity: what is this? And the attitude of careful listening, I am the awareness inside of the object outside, awareness is both and everywhere is here, everything is this;  as far as the eye can see.

‘Thus Tathagata, He-Who-Has-Attained-to-Suchness-of-Mind and sees no more definite conceptions of self, other selves, many divided selves, or one undivided universal self, to whom the world is no longer noticeable, except as a pitiful apparition, yet without arbitrary conception either of its existence or non-existence, as one thinks not to measure the substantiality of a dream but only to wake from it; thus Tathagata, piously composed and silent, radiant with glory, shedding light around, rose from under his Tree of Enlightenment, and with unmatched dignity advanced alone over the dreamlike earth as if surrounded by a crowd of followers, thinking, ‘To fulfill my ancient oath, to rescue all not yet delivered, I will follow out my ancient vow. Let those that have ears to hear master the noble path of salvation.’[Jack Kerouac, ‘Wake Up,’ 1955]