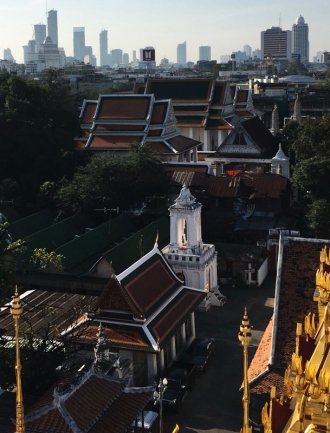 POSTCARD#298: Bangkok: 3:30 am: Almost awake in the darkness of a warm insect-click, whispering night; dreamscape/ language interface and a question arises… floats in air motionless, then ascends, as light as a feather. Which way will these air currents take it? Something about the usual way I perceive my surroundings is different. The pronoun ‘I’ becomes ‘him’ over there, engaging in active thinking… looking for words to make sense of it all. Curiosity shifts, rolls over and retrieves the word ‘pain’.

By this time, the session with the Pain Clinic yesterday has returned to memory and now I’m nearly awake – so the big question is… has the headache gone or not? Focus attention again on the location of that pain, as a particular point on the headache ‘map’… is it there? Push myself up in bed, swing legs over the side, soles of feet on cool flooring. No, the pain I feel is where the needle went in, and all around that, is a totally pain-free zone. It worked!

I want to fling open the bedroom door and go running up and down the stairs, but I can’t do that because we have a 5 weeks old baby in the house… it’s a long story. Compassion for those having no understanding of the Buddha’s teaching on the Noble Truth of Suffering – Suffering? Not for me, no thanks, it sounds awful. I want to be happy. There they go hungering after that happiness, and trying to keep it all in balance, the tipping point, verging on total disaster.

Systems developed from the recognition of the kind of suffering that’s caused by resistance. Seeing myself fighting against it, as it’s appearing in present time, sometimes hating it, and holding on in some way to a temporary pain-free state, short-lived because unknowingly I’m pulled away by a yearning for something else and the round-and-round of wanting things to be different than the way they are.

I’ve learned that the best way to keep your balance in these investigations into the way things are, is to not want anything, and not seek anything, because there’s ‘not anything’ there – not ‘nothing’, not ‘anything. If I can see it like that, the holding-on thing is not getting in the way. What I’m left with is a contemplation of the question rather than looking for the nearest-match answer. We can’t know what it is in the conditioned realm; beyond the point of no return, and there are no words for it. In the end maybe, all that remains is the word ‘it’ – there’s a metallic click-sound to it as that too is cut off, extinguished, the cessation of the conditioned world. This is as far as it goes in Theravada Buddhism – other Eastern teachings may have more to say about ‘it’.

‘The real is not something, it’s not anything. It’s not a phenomenon. You can’t think about it, you can’t create an image of it. So we say unconditioned, unborn, uncreated, unformed. Anatta (not-self), nirodha (cessation), nibbana (liberation). If you try to think about these words you don’t get anywhere. Your mind stops, it’s like nothing. … if we’re expecting something from the meditation practice, some kind of Enlightenment, bright lights and world-trembling experiences, then we’re disappointed because expecting is another kind of desire, isn’t it?’ [The End of the World is Here, Ajahn Sumedho]

12 thoughts on “not anything” 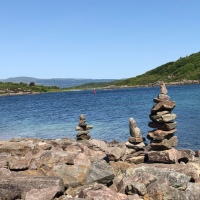 The World Through My Eyes

An epic travel toward self-knowledge

travel, learn , have fun, explore and be happy

Life on the Sidewalk.....(No, I'm not lost. To be lost you have to know where you're supposed to be in the first place.)

a bloggery of flaws, cracks and scars