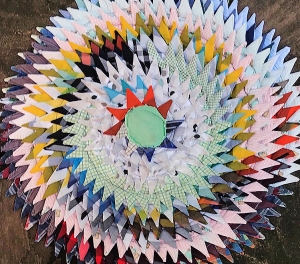 POSTCARD#335: Bangkok: The sad truth about the West, is that divorce is about as common as marriage. Religion got deconstructed; the story came to pieces, no belief, no myth to feel directly connected with, except perhaps the myth of no-myth. We’re married to the economy, worship the consumer god, seek refuge, gratification, fulfilment and consolation in the purchase of goods and services. What’s left over after that, in terms of belief, we have to figure out any way we can.

It’s a world of our own choosing – for better or worse, wedded to the belief in a concept, no more. Here today, gone tomorrow… but it can take many years to wake up and see it for the illusion it is. Sadness, loss, but no one to blame, think forgiveness, wellness and the honesty of living in the world while waking up to it. Who am I? Who is the one who seems to inhabit this place? And a ‘self’ slips into view, flimsy, insubstantial ghostlike being. Life looking in through the eyes, input/output, and the experience of this room, inside-out, this space that contains the sensory apparatus I believe to be ‘me’ appearing in an agreed-upon reality.

Borderline cat burglar, a master of disguise, the skilled actor is one who’s had to lose his/her identity through necessity (hereinafter called The Party of the First Part), becomes an expert in taking on a ‘self’ that fits into context… a suitable arrangement. The ‘me’ I live with now, is not the ‘me’ I was then – more than 30 years since, a ‘self’, seen in the shadow of a dreamed-up past, the divorcé in mourning for a family lost in death and divorce. Mourning over that which was started but left unfinished, abandoned through forgetfulness.

One signature and all of it annulled, lineage discontinued. No time to say goodbye to my adoptive family who had all welcomed me, the in-law, into their hearts as a brother and son. I like to think they wished me well, in fact… I’m sure of it, but gone is gone, empty spaces in the fabric of my life. I am the one who went away and forgot to come back; since then, wandering through the overwhelm of many years in Asia, and the ruins of a life I lived once.

The absence of this person or that person, heard about years later, passed away a decade ago already mourned, forgotten even. My ex-mother-in-law gone from this world, her husband, Pops, gone too. How could I have let this happen? Remembering, there’s-no-one-to-blame, forgiveness asked-for and given. Forgiveness asked-for from those we thought to be blameworthy. Forgiveness to ourselves for bearing the burden of applied blame… forgiveness is our mantra throughout the day. Forgiveness, said in a whisper of unvoiced consonants, over and over.

[Forgiveness Prayer: A Course In Miracles]

16 thoughts on “death and divorce”

Through The Cracked Window (Revisited)