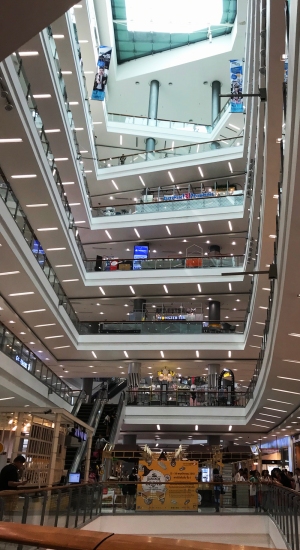 POSTCARD#337: Chiang Mai: 05.00 hours. Dreamscape of spinning fans in a warm dark night, gives way to another sound, a motorbike intrudes, coming nearer and nearer, voices talking loudly – the driver and his companion sitting behind, shouting to be heard over the sound of the engine. Driver lowers the throttle to listen to what’s being said. The sound fills my room up here on the third floor, as it passes below, engine noise and a few disconnected words, then it’s quiet again.

I hear them, faintly now, fading into the distance, enclosed in the small environment of their moving world. Curious acoustics in this narrow street, the sound of the shouted conversation sliced into pieces only where there are facing buildings – and other people, I assume, are wakened for a moment, as I was, then fall asleep again. Consciousness creating continuity between otherwise unrelated but similar things. Thus long strings of events linked together form a lifetime, included in one seamless reality.

Just as a monkey moving through the forest or the woods holds on to a branch, lets it go and holds on to another; in the same way what we call viññāṇa (consciousness) arises as one thing and ceases as another, by day and by night.’ [SN.II.95]