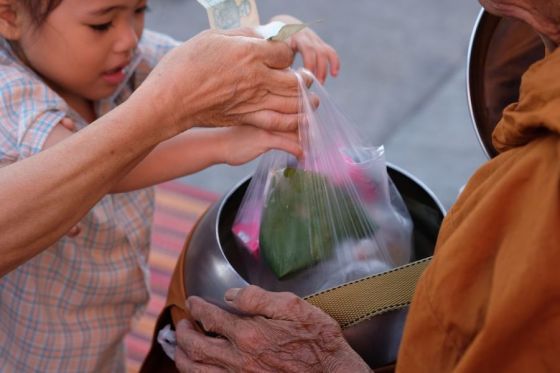 POSTCARD#388: Bangkok: The photo of the boy and his mum, and the old monk with hands that have done a lifetime of physical work reminds me of the automatic generosity of the Thais and how nothing is ‘held on to’ more than is necessary at the time. As far as I can see, the Thai culture is free of most of the typical psychological problems we have in the West.

There’s so much we could learn from sharing, giving things away, good-heartedness. Generosity, is letting it go; releasing the persistence of holding on to things; all that baggage we burden ourselves with can be removed in one single act of generosity.

I’m the same as most of us Western folks, internalizing all kinds of stuff without realizing. Holding on like that for a month or so and I’m talking here about a physical problem I had, uptight and worried about it. My health condition being as it is with my large consumption of water, a side effect of whatever it is in the meds for the headaches that makes me feel dry all the time. What happened was the sodium level dropped well below the norm, but more serious than that, was the throat now painfully raw due to what I thought was the excessive swallowing of liquid.

Whether it was that or not, I became aware by observing this sore throat, it did not feel like a benign thing. When the pain arose, it was like something that reached to the centre of my being. What could this be! A malign tumor hidden away somewhere in the digestive tract?

I wrestled with the thought for ages and eventually went to see the ENT doctor and in a few minutes, we were looking at a video screen showing the inside of the mouth cavity seen from the nasal passages, by way of an endoscope camera tube, passed through a nostril.

I was surprised and interested to learn the tube could not enter through the right nostril at the time because it was almost completely blocked, but the other nostril was clear. This is the nasal cycle where the actions of the blood flow according to the inflow/outflow of air, switch from one nostril to the other every 2 hours or so, and that’s just the way it works.

I was quite comfortable sitting there with this nice doctor and her assistant. Having the camera tube inside the throat cavity was painless and the video screen where I could see the funny-looking vocal cords and I felt even more relaxed when the ENT doc said there was no evidence of a tumor! The ghoulish presence hanging over everything was swept away and forgotten.

The doc said the deep pain was probably an aspect of the same neuralgia condition that causes the headaches. The Right Occipital Nerve Root is near to the back of the throat, and when a nerve is activated it sends off the same erroneous alarm signal that is characteristic of Post Herpetic Neuralgia. Ah well, same old thing, no worries I have learned how to cope with that ‘scary monster’.

It was learning about the nasal cycle, switching from one nostril to the other that was remarkable. I looked it up in Google and this is the gist of it: blood vessels in the sides of the nostrils warm and humidify the air coming in through the nose before it reaches the lungs. The process uses one nostril at a time rather than both at the same time. Blood flow is sent first to one nostril so that it warms the air coming in. The interior of the nostril receiving the blood flow starts to swell and blocks the space slightly. As a result, there’s less room for air to get in, that’s when it switches to the other nostril.

This little gem of info is important to meditators who spend time in meditation every day, focused on the in-breath and out-breath. It’s also a great example of the allowing, the giving of space, the widespread generosity found in nature; systems in place to allow more than enough of whatever it is.

“Species as diverse as bees, birds, bats, rats, and chimpanzees all exhibit forms of generosity, or what can be broadly described as ‘prosocial behavior’—acts that benefit others. The broad occurrence of generosity across species suggests that generosity may be an evolutionary adaptation that has helped promote the survival of these species—and our own.” [Summer Allen, Ph.D.]

Generosity is a glad willingness to share what we have with others. Give it away, we have more than enough. Ease the discomfort of being driven to fulfill that urge to ‘have’, to ‘possess’, a hunger created by always wanting more. All of it is gone when you’re generous.

Brainstorm the word ‘generosity’ and you come up with compassion, empathy, well-being, freedom. You find gratitude, grace, honour, motivation, encouragement. Generosity is everything. It’s nature is to share, recycle, circulate; it can only be given and never taken.

9 thoughts on “letting it go”