POSTCARD #222: Bangkok/New Delhi flight: An awareness of things as they are. The main event was the injection in the head and the constant (PHN) headache gone instantly. Wake up next day and it was still gone, gone as I write this, and it remains gone. So reassuring to know the transformation to ordinary things is possible, the car is back from the garage and out on the road again.

The release from head pain is still held back due to the pain of broken rib but so much easier to cope with now the headache has gone. Walking the miles in airports was thought to be a problem though, so Jiab convinced me to request a wheelchair. Wheelchair from check-in to the lounge then wheelchair to the plane, straight in and the first seat in C class section of the plane. Stewardess puts my bag away in overhead luggage space. Wonderful, I’d never been a wheelchair passenger on an aircraft before, my first time. Plenty of space in this expensive seat, a meal with endless courses, and I slept the rest of the way; so comfortable since these recent days of sudden pain, tossing and turning at night and discovering the only way to try to sleep is sitting up on an inclined wall of pillows.

The odd thing about being in a wheelchair is you approach silently, moving along very smooth floor surface feeling the vibration of small jolts of joints between tiles below, crowds part immediately. If anybody is still standing in the way friends will pull him away or the wheelchair guy says excuse me please? and they move straightaway. A few sideways glances and I resist the temptation to say Hi, how’re you doing? And sometimes feel I should try to look really sick, to provide a reason for being like this, problem is having a broken rib is not a noticable thing. But I keep looking ahead exercising the right to be in a wheelchair and humbled by the generosity of everyone giving way. Astonished by the experience of sitting on wheels in a public place, the great perspective of long airport walkways ahead and seeing the surroundings move towards and go through me. Also the thing about travelling long distances while seeing the world from a lower eye level – a familiarity, déjà vu, the memory of being a child again.

The wheelchair experience means an understanding of what helplessness is, understanding vulnerability, aging… it’s all coming unglued, bits dropping off, but the revelation comes along too there’s no point in feeling bad about yourself because you are simply incapable and that’s all there is to it. At the same time, being (temporarily) disabled gives some insight into the existential plight; the realization that most of us are held prisoner in a trance-like state, incultured into the ‘self’ fiction through the mirror of society’s fear of the unknown, living with a sense of purposelessness and not able to see it.

Not able to cope with pain, tragedy, loss; unable to see the awareness that accompanies our ordinary joys and sorrows – there’s more than one kind of awareness, this provides some relief from pain, ease and understanding; I can step back from the trauma and see it as coming from somewhere else. I can be engaged in clinging and at the same time be in a position to see that this is what’s happening. Letting go, it’s not ‘mine’ anymore.

Then we’re in New Delhi, into the Indian wheelchair and out onto the miles of ochre coloured carpet. At the end of a long time of sitting, I’m looking up at the immigration official; passport thump and wheeled in, permitted to enter the country.

“How should we be able to forget those ancient myths that are at the beginning of all peoples, the myths about dragons that at the last moment turn into princesses; perhaps all the dragons of our lives are princesses who are only waiting to see us once beautiful and brave. Perhaps everything terrible is in its deepest being something helpless that wants help from us.” [Rainer Maria Rilke]
————————– 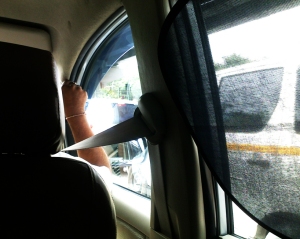 New Delhi: Moving through the streets to get on the highway to the airport; rough and bumpy, chunks of road surface missing. Demolition and construction, the urban environment is getting knocked down and rebuilt. We stop at an obstruction in the road caused by a large lorry unloading bricks, sand, cement and all I can see is the rear end of all these small vehicles standing together, jostling to get through… transportation of goods and services; bits of pipes and fittings, cables and plumbing items. Packages wrapped in plastic, held with bungee cords on the back of motorbikes; components, textiles, items boxed in packaging. A cycle rickshaw with a refrigerator on the back, and another one blocking the space with a large plywood panel tied on with rope at an awkward angle.

Drivers getting upset, the sound of horns, people walking around this blockage and through the traffic, carrying things on their heads, dragging children. Pavements are not for pedestrians, there are obstacles, tree roots, missing paving stones, sometimes no pavement at all; heaps of rubble, deep holes below where the drainage system is seen. The earth is beneath the streets, beneath the tarmac and the concrete and the clay, a substance created by erosion, geological conditions. The ‘developing world’ – no such thing as the ‘developed’ world. All of it is subject to change.

Up above, there’s a mass of overhead cables slung between high concrete posts, and a barefoot technician is up there on a bamboo ladder resting on the cables themselves, pushed out in a big stretch to accommodate the weight of him on the ladder. He’s threading another set of cables through, his partner below holding the ladder and traffic gets past them like the river flows around the stones in its path.

The infrastructure of the city is in the centre of my vision, not hidden. Everything that the environment is made of; all this is seen, the inside of it as well as the outside. Systems, processes, how things are done – evidence that the world itself is a constructed thing, put together, assembled, built. It has an unfinished look, bits of it are missing, removed, or not installed yet, or just left exposed; somebody took away the screws that hold the cover plate in place.

Things are unexpected, uncertain, everything is so much not what we think it is, there are no assumptions. The Western point of view that it ‘shouldn’t be’ like that – it ‘should be’ like this, is a concept imposed on a living organism, alive and moving. If I allow the organism to be as it is, I can disengage from the mind state where I think it’s something it’s not, and everything that’s currently bothering me about that disappears. I choose to be with the uncertainty of it, more and more; look at the dilemma of suffering without attaching to it; and challenge my tendency to see it in terms of a constructed self: anicca, dukkha, anatta – impermanence, suffering and no ‘self’.

Arrive at the airport, check in, and through to Departures, happy to be in these ‘normal’ surroundings …the flight for Bangkok is now ready for boarding… I’m just a visitor, on my way to somewhere else. It’s difficult for me to have the infrastructure poking through into the way I choose to see things, because usually I have negativity and unpleasantness hidden away. Since childhood, my belief has been based on affirmative statements: the act of creation and the idea of a heaven… only pretty words. The truth is that ‘heaven’ is a reality beyond description – language doesn’t go that far. This kind of childlike ‘heaven’ is a fiction, not real in the sense that I am in the real world; the nuts-and-bolts of conscious experience, the present state of affairs. This here-and-now reality is fundamentally the same as it was 2,600 years ago, in the time of the Buddha, here in India.

What I’m trying to do now is to resolve the issue of fearful uncertainty by accepting the fact that there is an underlying sense of suffering (1. dukkha) in life and I need to contemplate this feeling with forbearance, rather than run away from it all the time. The direction this contemplation takes is simply to find out what it is I’m doing that’s causing the suffering (2. tanha), and stop doing that. It’s about letting go of whatever it is that’s causing it and I notice when that happens, the suffering stops (3. nirodha). This insight suggests there is a possibility I can stop the suffering completely and I follow the guidelines (4. magga) that show me how to do this consciously, in daily life. [The Four Noble Truths]

Time to go now, hand over the boarding pass to the Thai staff, she separates it along the perforation and hands me back the tab with my seat number. Goodbye India! I’ll be back in two months. Laptop bag on shoulder, and off down the passageway to the aircraft…

The subject matter and title of this post indirectly inspired by: Forbearance by Norman Fischer http://standinginanopenfield.wordpress.com/2013/05/19/forbearance-by-norman-fischer/ Also mentioned in that site, a comment by Dominic724: ‘Without forbearance it’s just a pile of pretty words’. The ‘pretty words’ comment triggered a memory of the Joni Mitchell song titled: ‘The Last Time I Saw Richard’ (1970) and ‘pretty lies’ (When you gonna realize they’re only pretty lies …). Lower picture image: Delhi Airport Departures