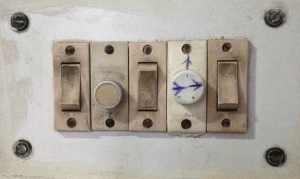 POSTCARD 138: London/Delhi flight: Travelling by plane at night is a directionless experience, an invisible route that leads to the destination without any sense of the journey, just the sound of the engines and hiss of the air. I fall deeply asleep and wake up to daylight coming in through the cabin windows. We’re here, missed breakfast, no time for anything, quickly gather up my things, ready to leave the plane. Next thing is I’m in the huge emptiness of Indira Gandhi airport, miles of ochre carpeting, and zooming along moving walkways towards the queue at immigration. Get in line with everyone else, get comfortable with this, it could take some time.

Hello Delhi, nice to be back here, mid-morning in a different time zone, and just the ongoing continuity of it, as if I’d never been away… familiarity of bearded men, turbans, a mysterious woman with exotic nose rings, gold bangles jangle and flick of movement that adjusts folds of sari, consoling tired children with nanny; the whole clan goes everywhere together. In this place I’m glanced at, averted gaze slips away, a foreigner travelling alone, a partially visible stranger from a place of no sunlight, colorless eyes, pale pigmentation, like those creatures who live deep below the surface at the bottom of the sea.

The uncompromisingly here-and-now of it, no disappearing from or disappearing into – a dream and yet not a dream. Letting go of the experience in the North, only the memory of that extraordinary feeling there during the retreat in Scotland. The feeling I’d connected with something specific but now I forget what it was exactly. A scrap of paper in my pocket with somebody’s email on it, remembering… there was the old house, the people who were already there and the sadness when they left before I did. Then the others who came after me – I remember them all – and how they were the ones who said goodbye when it was my turn to leave.

Each one carrying this ghostly sense of familiarity, archetypal resemblance, the uniformity of distinct types. Faces I think I’ve seen before… there was a man who looked so much like Larry King (from Larry King Live), at first I believed it was him. Others reminded me of family members – I recognized Great Aunt B. from East Anglia, passed away long ago… wonderful to ‘see’ her again. And someone exactly like my old Uncle D. Everywhere I looked I saw the elders, all dead and gone now. So good to return to the memory that they were here once like me, I was inclined to think of them as being real. “Who am I? Am I you? Him? He, she, it? We, you, they?” So much of a multiplicity, sometimes it’s just seen… we are all of a oneness.

Thump! Passport stamped, out through the crowds and sudden heat, intense light switched on like a television studio. Shym is waiting with the car, bags in and we’re off into the noise and blare of Delhi traffic, reversed mirror image of the world I just left. Changing the sim card in my phone, changing channels, watching a different movie.

As silence is not silence, but a limit of hearing.
As some strings, untouched, sound when no one is speaking.
So it was when love slipped inside us.
As this life is not a gate, but the horse plunging through it.
The heart’s actions
are neither the sentence nor its reprieve.
Salt hay and thistles, above the cold granite.
One bird singing back to another because it can’t not

Note: This post was created partly as a result of keying in the term ‘multiplicity of faces’ in Google and finding the pdf in: perceptionweb.com. Check out the exercise of flickering faces in the picture of the girl’s face at the end.
Note2: Many thanks to Mindful Balance for the poem.
Photo: light switches in a corridor at the back of a government building in New Delhi