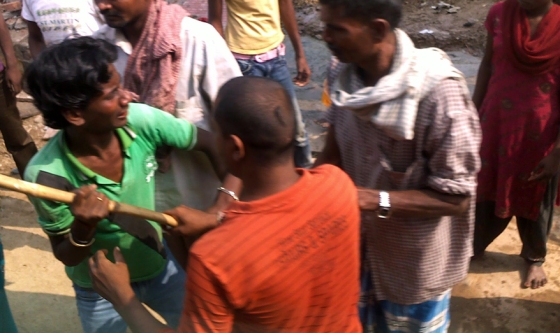 POSTCARD#307: Chiang Mai: The image here, was taken while we were on a visit to the holy Buddhist sites in North India. It shows a group of men involved in some sort of argument, viewed from the window of our tour bus, as it was moving through crowds of pedestrians and various kinds of vehicles. The sound of very loud angry voices and heavy blows got everyone’s attention, all I could see was the top of their heads because other passengers crowded the bus window. No room to squeeze in, so without seeing where to point the camera, I held it in a downward position and ‘click’. It was guesswork, thinking it’ll probably not come out, but it did – the group perfectly positioned in the centre of the frame. The bus made its way slowly through the crowd then accelerating along empty streets and we were gone in a moment.

Looking at the image now, the man in the green shirt is trying to do something with that pole and the other guys are preventing him or pushing back. The tremendous intensity coming from the green-shirted man is noticeable.  Murderous thoughts ready to explode on the surface. There’s another emotion too, he looks determined but tearful, as if he might start to cry. It was significant, I suppose because there we were on a tour of the Holy sites where the Buddha had spent most of his life, and now this 2500 years later, an example of Greed Hatred and Delusion. The Buddha must have come across many such disputes, and quietly observed aspects of the argument, or sometimes he would have been asked how best to resolve the issue.

Looking at what’s written about the three defilements, or three poisons, and contemplating these, I see that the natural human preference is that conflict be forgotten, and as long as no effort is there to keep it going, conflict falls away by itself. There’s all kinds of other stuff that engage the mind however, conflict is gratifying, feeding the base sensory driven state. We fuel the fires to maintain conflict in the mind; in our world media coverage and war-mongering, the opportunity arises to build up tension, involving narratives in the mind, peaking in justified outrage. If the political manipulation of circumstances were not there, we could just as easily allow the conflicted mind go, but we’re drawn in, and it gets to a point when engagement with the consequences of conflict is inevitable; this is always how it is.

I started up my laptop this morning Thai time, and discovered that the US led coalition had sent missiles into Syria. I wanted to write something about it, then found an old post titled ‘Conflict and Release’ that seemed somehow unfinished, waiting for events to be right for its conclusion. So that was all I could do, and here it is rewritten. Regarding the event itself, all sorts of things come to mind, mainly to do with cover-ups, otherwise the same as all other kinds of war and arguments forever unfinished. The Buddha offered a way to understand how the mind works and to see, through ordinary human experience, the way to bring an end to Suffering.

I seem to be rewriting old posts these days, rather than writing new posts. This is how it is at the moment, busy in the studio and not active in front of the screen. I hope to be able to offer up some examples of new Art soon.
Be well
T